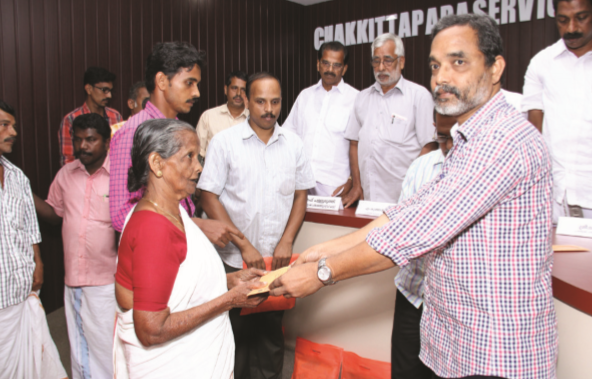 A fully fledged library with informative and other books is functioning in the Bank. There are about more than one thousand books in the Library. The students and other people use this library free of cost. Free Wi fi facility and internet are available in the Library

Houses for the poor

The bank implemented a scheme for constructing sixteen houses for the poor people through the Pulari Foundation a charitable society organized by the bank. Common good fund is used for such charitable activities. Rs2750000/- has been spent for the purpose so far.

The scheme assisted by NABARD named Kozhi Gramam is also adopted by the Bank for the rural development of the Perambra Block Panchayath in which the Bank functions. This scheme is for on-lending to Poultry (Layer) and Poultry (broiler) farming to the Joint Liability Groups. Under this scheme 13750 birds for poultry units were issued and 6187500 eggs were collected from the poultry units for marketing during 2016-17. 550 cages the poultry farming were distributed to the rural public. Egg sale worth Rs 43312500 has been made through scheme of Kozhigramam.

The Bank has conducted 4 day study class of Indian Institute of Space Science and Technology as regards space science for the students of High Schools in the area of operation of the Bank. 200 students have participated in the classes